An open letter today urges global tech giant Google to stop the scare tactics and negotiate a fair agreement with media companies to share advertising revenue in return for the journalism content they currently use for free.

The Australia Institute’s Centre for Responsibility Technology has today published an Open Letter to Google, responding to Google’s Open Letter to Australians that the company posted earlier this week. 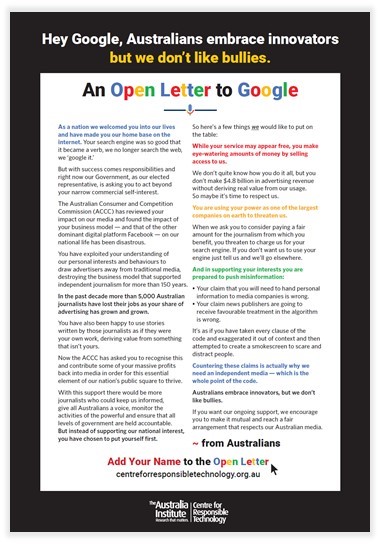 “Google’s response to the ACCC’s attempt to level the playing field and support quality Australian media, underlines exactly why the ACCC code is fundamental to a robust media landscape in Australia,” said Peter Lewis, director of the Centre for Responsible Technology.

“Not only has Google used its immense power and reach to directly message Australian users with an attack on the ACCC process, it has misrepresented key facts in a way that appears designed to spread fear.

“The response from Google underlines how important the ACCC’s media code is in creating a model that could rebalance the destructive relationship between publishers and platforms globally.”